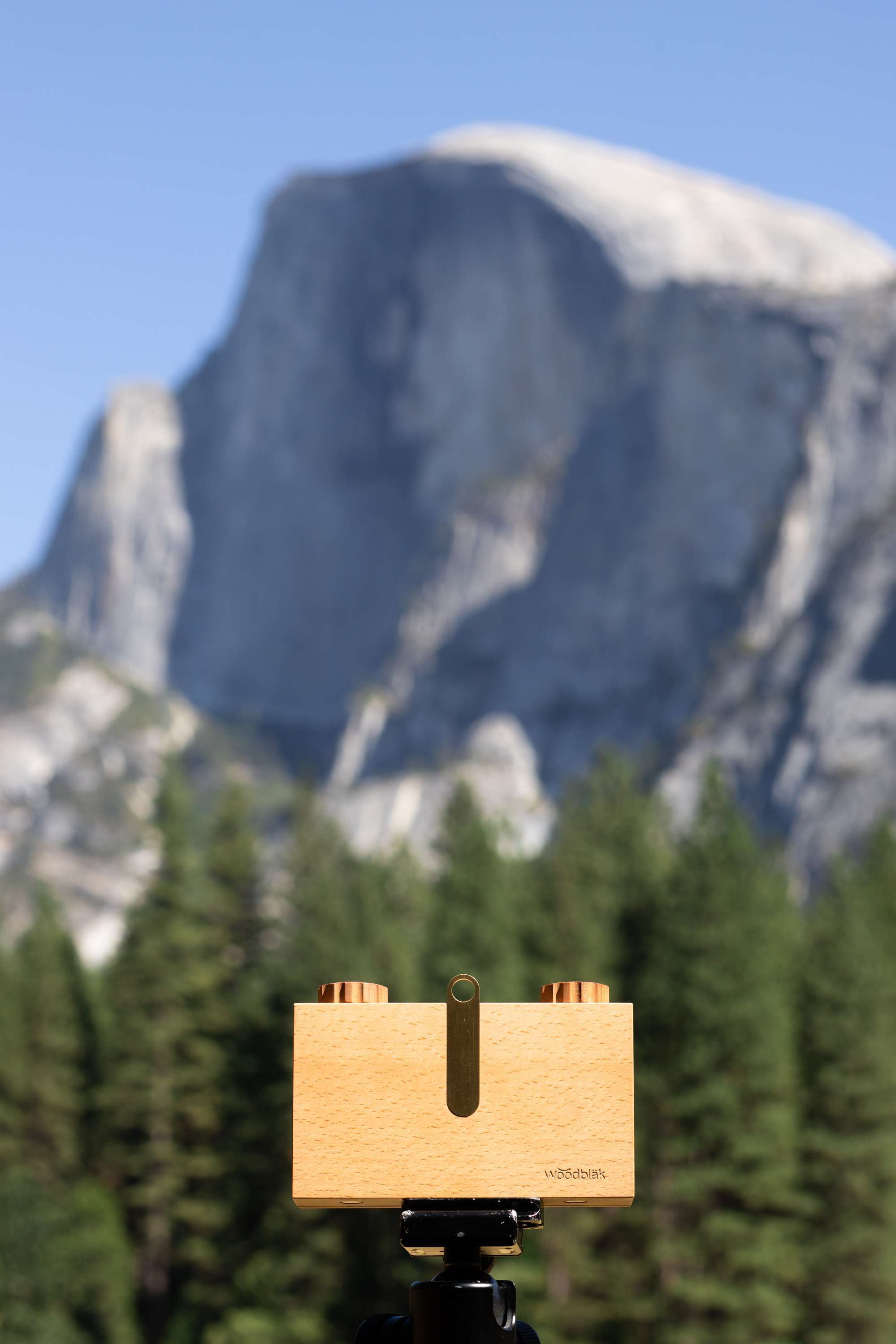 The Woodblak - A Unique Pinhole Camera Goes to Yosemite

The Woodblak - A Unique Pinhole Camera Goes to Yosemite

Having shot film for over ten years now, I've had the opportunity to test and own many different kinds of film cameras. Shooting with a pinhole camera, though, was a completely new experience for me.

The Woodblak is by far the most minimal camera I’ve ever used. That is the beauty of pinhole cameras: they’re very simple. This camera is completely manual, featuring one f/ 120 pinhole aperture, a manually operated brass shutter, and a manual film advance. While the Woodblak may be very basic in function, it's eye-catching in form. It is artfully crafted from a solid piece of wood and finished with beautiful brass parts. When shooting with it in Yosemite I got many compliments and questions - it’s definitely an attention getter!

After a stint of living in Yosemite for 3 years and now frequently shooting weddings there, I often find myself seeking out unique ways to capture the park. Shooting with the Woodblak was a fun and very different way to photograph Yosemite. During this visit, I shot 2 rolls with it: a roll of Ilford SFX 200 and Tri-X 400. Due to the camera's small aperture of f/120, I shot at very slow shutter speeds, making a tripod absolutely necessary. I also bracketed my exposures by roughly a half a second, a full second, and 2 seconds-- all of which was done manually by lifting and lowering the brass shutter at adjusted speeds by hand.

When I got my scans back from The Darkroom Lab, I found that the longer, 1-2 second exposures worked best since they exposed for the shadows. 120 B&W film has such great exposure latitude that the highlights still looked good. Being used to precise focus and exposure, the classic pinhole look bothered me at first, but in the end I grew to like it. Pinhole photography is not about perfection. In using with the Woodblak, I found that it’s more about the process of shooting. It's hands on. And since it has limitations, it makes you think more, which allows you to capture scenes in a completely different way.

If you’re into pinhole photography, want to try something new, or simply want a beautifully made camera that needs no batteries or meter--I totally recommend the Woodblak. It was pleasure to shoot with and a great change of pace!

About Trev: Trev has come to learn that beauty isn't meant to be seen, it's meant to be experienced, but with that being said, Trev tries his hardest to capture the beauty he experiences for others to view and enjoy. Trev is the the primarly content creature for the Darkroom Lab in San Clemente, CA as well as a full time photogrpaher. He primarly focuses on his photography work with various films, and analog cameras.

Order Your Woodblak today! Or stop by and see it in one of our stores.

Looking for an amazing lab to process & develop your film? We love sending our film to the Darkroom Lab. They offer a variety of services from processing, scanning, development and printing.