Welcome to the second edition of the The Rewind, a blog series in which I field test some of the most fascinating pieces of film equipment at Camera West. My name is Gabriel Binder. I am a photographer, darkroom print maker, and historian. I work at Camera West in web sales, testing, researching, and describing the cameras that we sell. Last time, I field tested the Hasselblad 501CM, the final incarnation of Hasselblad’s most classic design. You can find that full review here. While shooting with the Hasselblad, I was struck by the purity of the 501CM’s operation. It is a machine that pares down the shooting process to its essentials, and allows its user to execute very carefully previsualized compositions.

The Voigtlander Bessa II is a very different machine. It is a rangefinder folding camera that makes 6x9 cm images on 120 film. It has no automatic film stop, no automatic shutter cocking, and no double exposure prevention. Focusing is achieved through an almost comically small viewfinder window with a very dim rangefinder patch. This a camera that does very little for you automatically by modern standards.

Voigtlander manufactured the Bessa II from 1950 to 1958, a period in which many of the great names of the photographic industry created their most classic designs. Voigtlander had produced cameras bearing the Bessa name since 1929 in various configurations, but the Bessa II marked the ultimate, and most advanced, iteration. The Bessa II’s most significant improvement over the Bessa I that preceded it was the combined viewfinder and rangefinder, a luxury feature for the time. I was unable to obtain a photograph that accurately showed the view through the finder, as its opening is less than a quarter inch wide, but the image below gives some idea of what it is like to look through.

The Bessa II also received a revised lineup of coated lenses, including the 4-element Tessar-type Color Skopar seen on this example, the five-element Color Heliar, and the almost mythic Apo Lanthar (which can command five figure prices). Voigtlander lenses of this period, especially the Heliar, are often touted for their “plasticity”-- that is, their ability to smoothly and pleasingly separate the subject from an out-of-focus background. Having personally shot hundreds of rolls through Zeiss Tessar-equipped Rolleiflex cameras, I was very excited to investigate the qualities of the Color Skopar’s rendering myself.

The Voigtlander is not a small camera, but it is remarkably compact when considering that a 6x9 negative is about six times larger than a 35mm frame. When folded, it is also very flat, making it easier to pack into a bag than many 35mm cameras. This also allows it to be slipped into a large jacket pocket, an option firmly out of reach of most other medium format setups. Try getting a Fuji GSW690 into your pocket.

The Bessa II is a handsome camera, and has a very fine fit and finish. The metal is solid and lustrous and the leather tightly hugs the smooth curves of the body. The symmetrical dials on the top plate, used for focusing and film advance, are a particularly eye-catching touch. The front standard spring into position with a touch of a small button on the bottom plate. The way in which the lens unfolds into the front standard is a small work of art in itself. It is immediately clear upon handling the camera that Voigtlander’s engineers spent many hours honing the small details of the Bessa’s design. 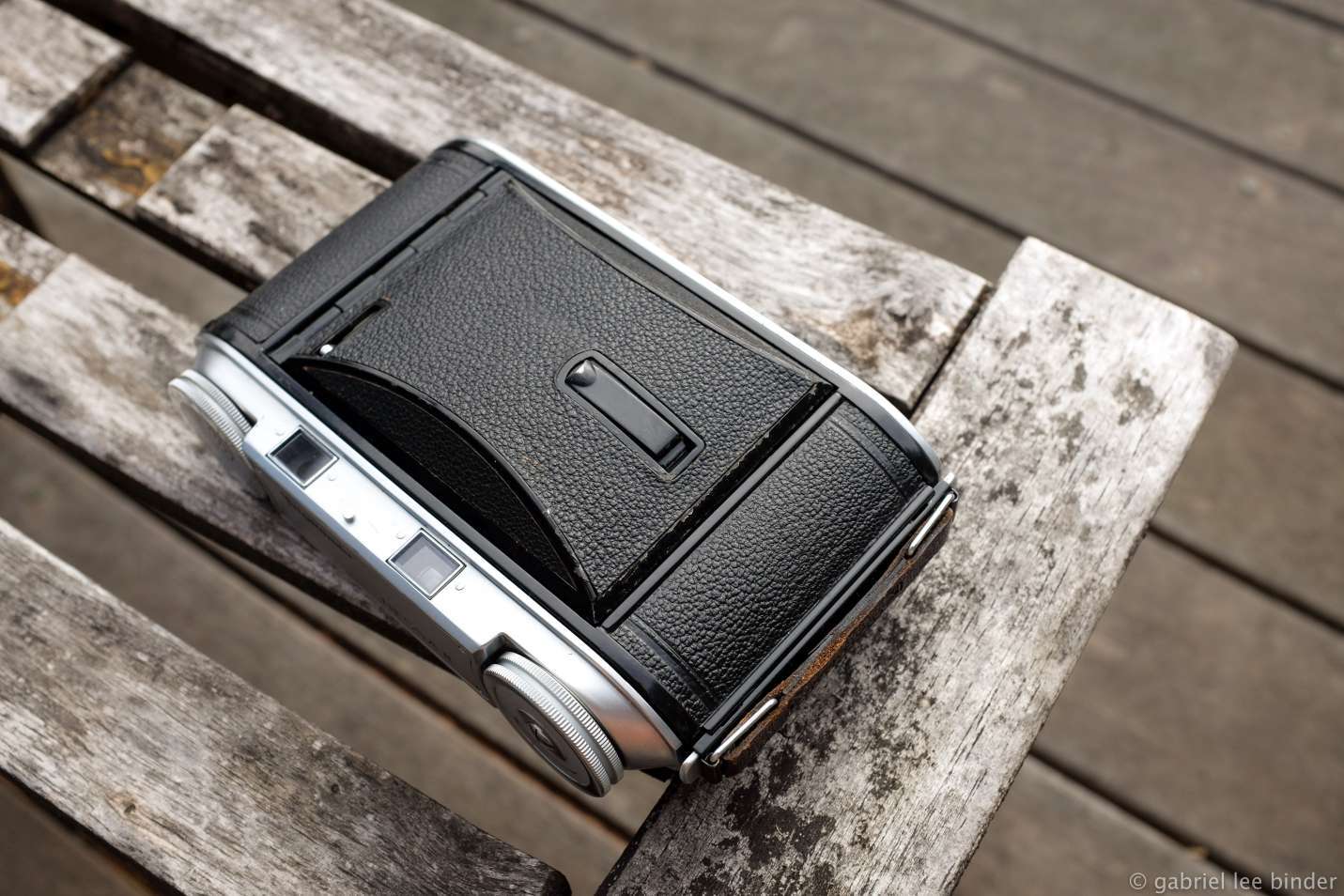 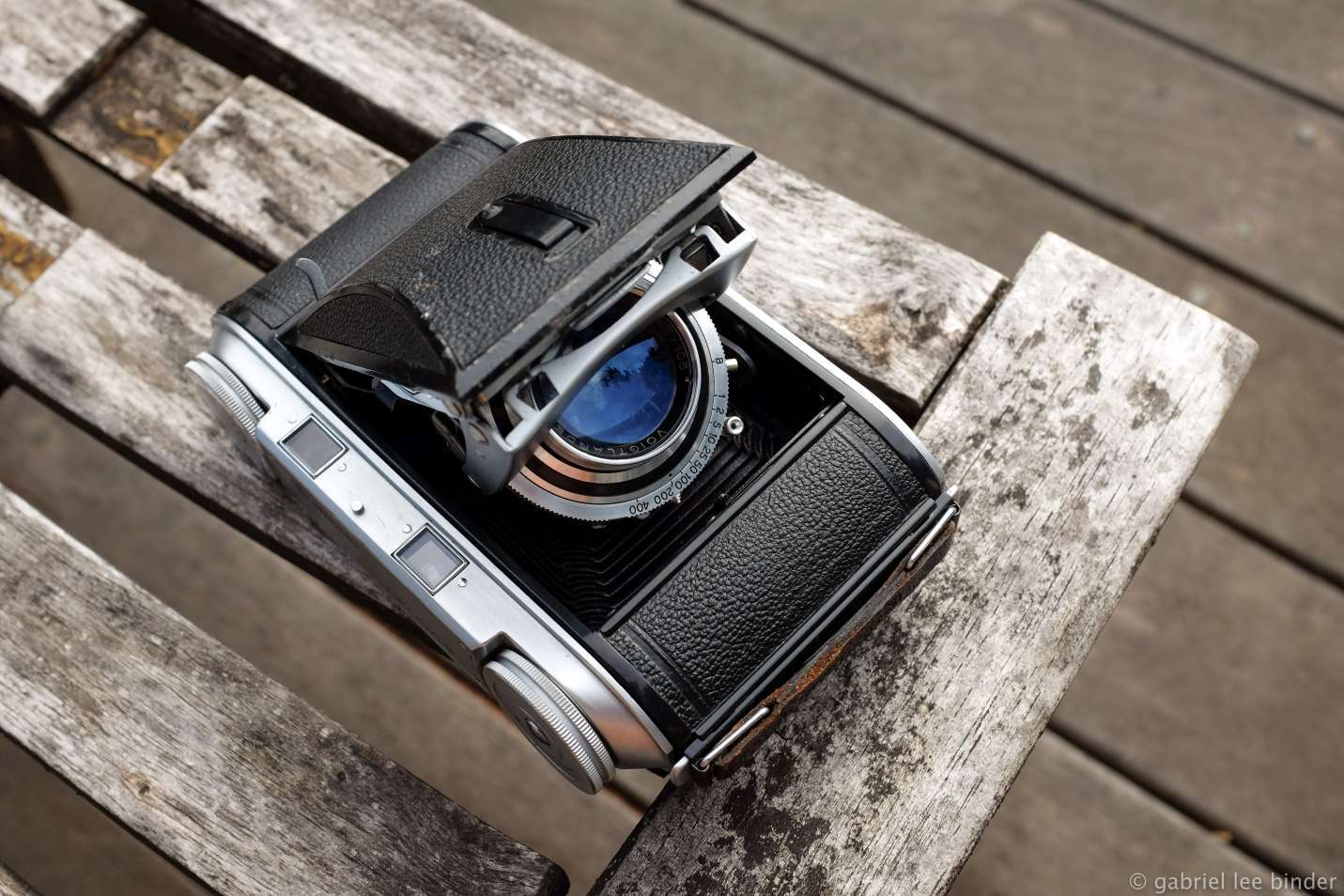 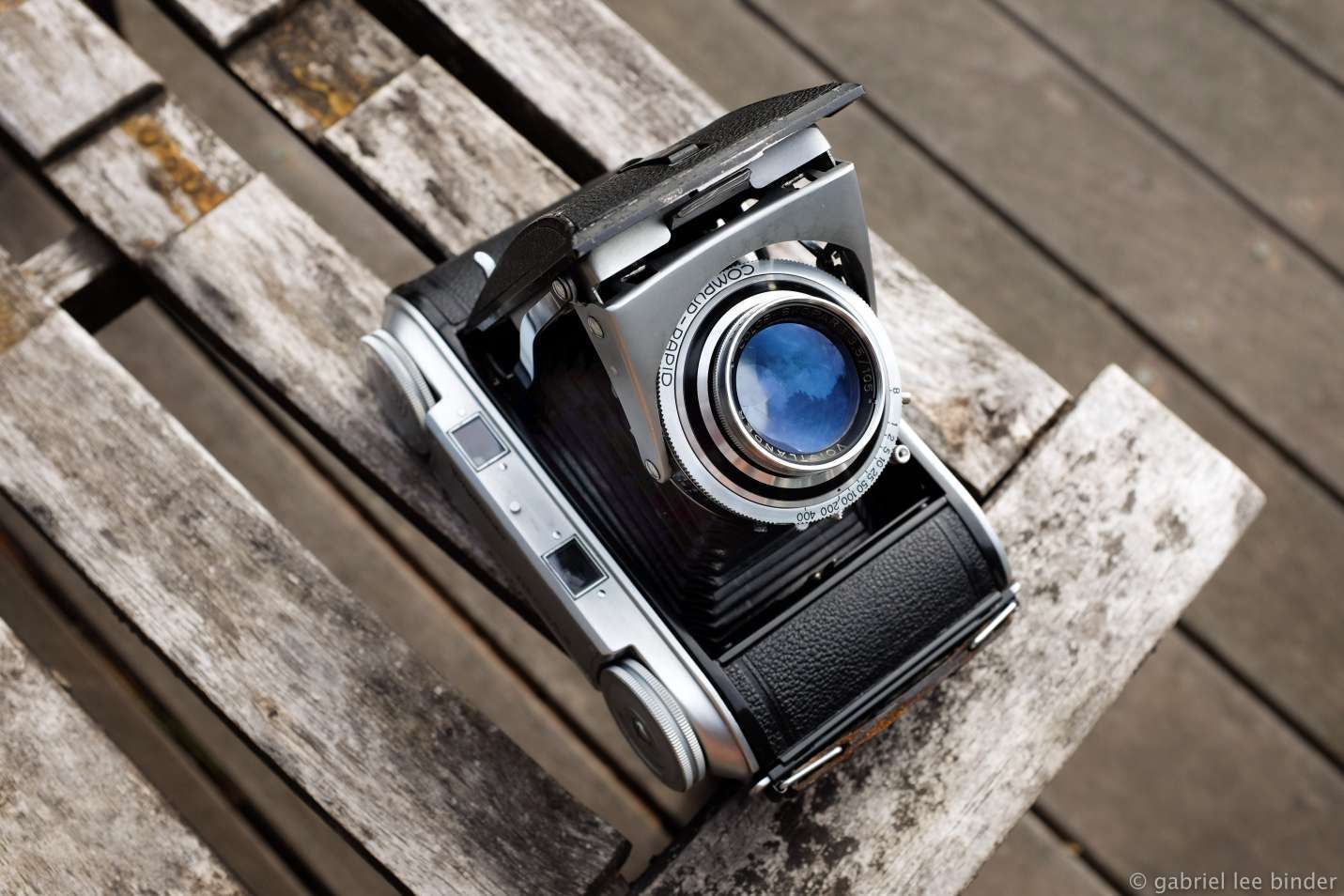 Ironically, this camera is most ergonomic when closed. The focus dial, noted earlier for its beauty, is oddly positioned for focusing while your eye is against the finder, though it has a pleasing focus throw. This is especially true when shooting in the vertical orientation, which places the focus dial directly in front of one’s mouth. The shutter is also located on the left hand side, leaving the right hand to cock the shutter, select the aperture, and advance the film via a red window on the back of the camera. This is a somewhat fiddly process, especially given that there are no preventions against double exposure. After acquainting myself with these functions, I brought the Bessa with me on two very different excursions to see how the extra involvement required by this camera might influence the images I was able to create with it.

For my first trip with the Bessa II, I took it with me to “Little Yosemite,” one of my favorite hikes in the Sunol Regional Wilderness. I packed it along with my Fujifilm GX617, a medium format panoramic camera, with the intent of using the Bessa II for quicker compositions as I was hiking. I was able to slip the Bessa into my jacket pocket as I lugged the panoramic kit in my pack, but quickly found that the dimness of the rangefinder patch, combined with the somewhat cumbersome shooting process described above, made it difficult to quickly line up a shot. I was able to capture the above image of my dog Rama as we explored a waterfall -- the bright sun and sharp lines of his fur made it possible for me to quickly focus this image before he bounded into the water. This image was shot at f/8, showing how shallow the depth of field is on the 6x9 format. The difficulty the Bessa II presents in trying to make images like this can make the successful attempts more fulfilling.

As expected, the Voigtlander’s 1/500th top shutter speed makes capturing fast action hit-and-miss; in this shot, the water was simply moving too caught in motion.

I found more success with the Bessa in situations like this, where I had more time to carefully adjust the focus. As this image shows, the Color Skopar is capable of impressive sharpness and contrast under the right conditions.

I shot this image facing into the sun to test Color Skopar’s handling of flare, a common concern with lenses of this vintage. Voigtlander made a shade and filters for the Bessa II, but using them would require one to remove them before folding the camera, which would greatly reduce the camera’s portability. As expected, the lens does flare considerably. In this case, I find that the flare adds to the character of the image.

Close studies are something of a risk with the Bessa II as it has no correction for parallax. I believe this image shows off the most desirable qualities of the Color Skopar -- crisp sharpness in in-focus zones combined with a smooth, continuous, “plastic” rendering of the background.

The benefits of the Color Skopar’s “plasticity” are most useful for portraiture, where they can render the background with a very pleasing, slightly “swirly” effect. My partner was gracious enough to wait while I adjusted the Bessa to make this image of her. The Bessa II is not the right choice for candid shots of people you don’t know well -- it simply takes too long fine tune the settings. If, however, your subject is comfortable and willing to wait, the Voigtlander’s shallow depth of field and unique rendering qualities make it an excellent tool for portrait work.

Overall, my experience hiking with the Bessa II convinced me that it had imaging capabilities to match its elegant appearance, when used in the proper contexts. For my second shoot with the camera, I chose to bring it with me on an afternoon wander around Berkeley. I had all the time I wanted to adjust my compositions and exposures, and was able to go without a pack because it fit snugly in my jacket pocket. I was curious -- without time constraints or moving subjects, what would it be like to shoot with the Bessa II?

I quickly found that this is the Bessa II’s natural environment. Giving myself more time to compose and focus really allowed me to get the most from the Color Skopar. This is a good example of a situation in which the rangefinder of this camera can be quickly and accurately used. This is how I intended to frame the shot, and focusing on the hard edges of the panes was easy. The detail recorded in this negative far surpassed anything that I could have captured with a 35mm setup.

I was more deliberate with the framing and exposure considerations in this photograph. I spent a lot of time adjusting my view of this scene through the viewfinder, and was near the close focus limit of the lens. In the end, I was very pleased with the sharpness and rendering of the lens. The Color Skopar has a different look from the Tessars and Xenars on my Rolleiflexes, but proves in this image that it is capable of reproducing quite sharp detail. I also was impressed with the tonal separation, as the sky was quite overcast. I’ve included a close crop below to give some idea of the detail recorded.

Reflecting on my two shoots with the Bessa as I developed the rolls, I found myself feeling a lasting appreciation for the effort Voigtlander put into this camera. The Bessa II is a smartly contained, elegant device that requires careful consideration of one’s subject and intention. If you are looking to slow down your photography and focus on a moment or feeling more than an exact composition, while at the same time recording immensely detailed negatives, it is hard to find a more appropriate choice.

Thanks for reading -- next time, we investigate a miniature version of one of the most classic cameras ever made. Cheers! 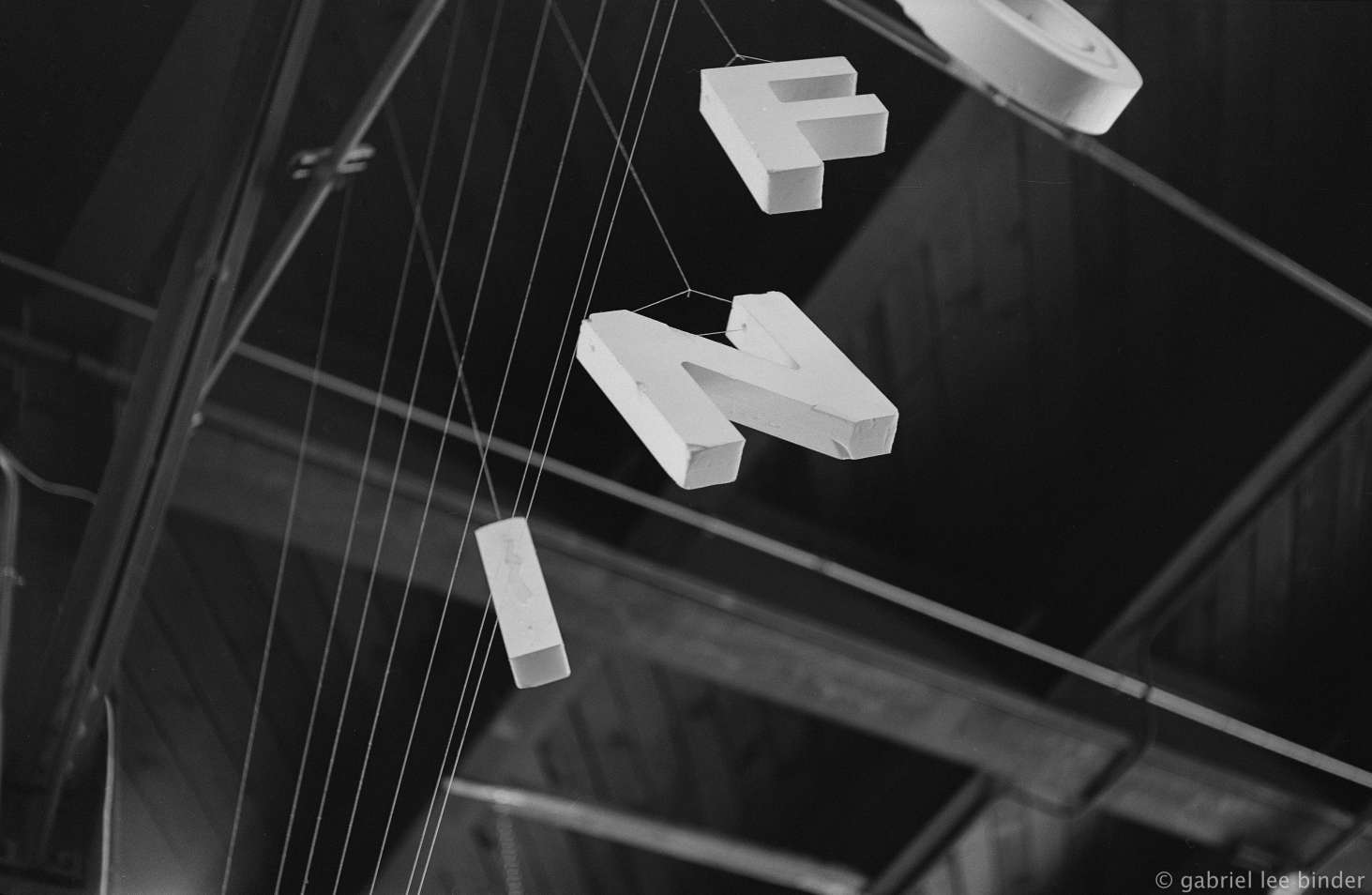 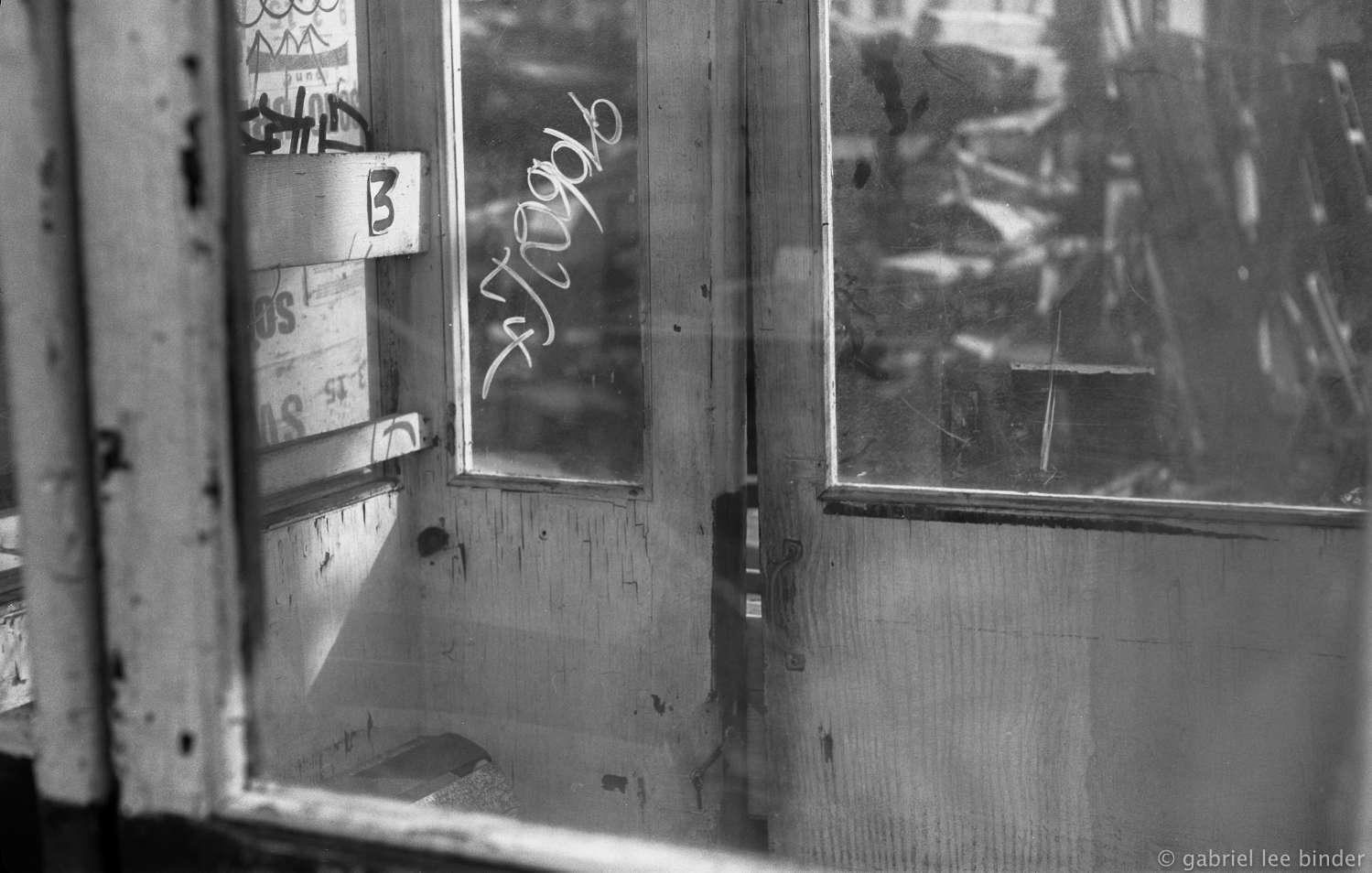 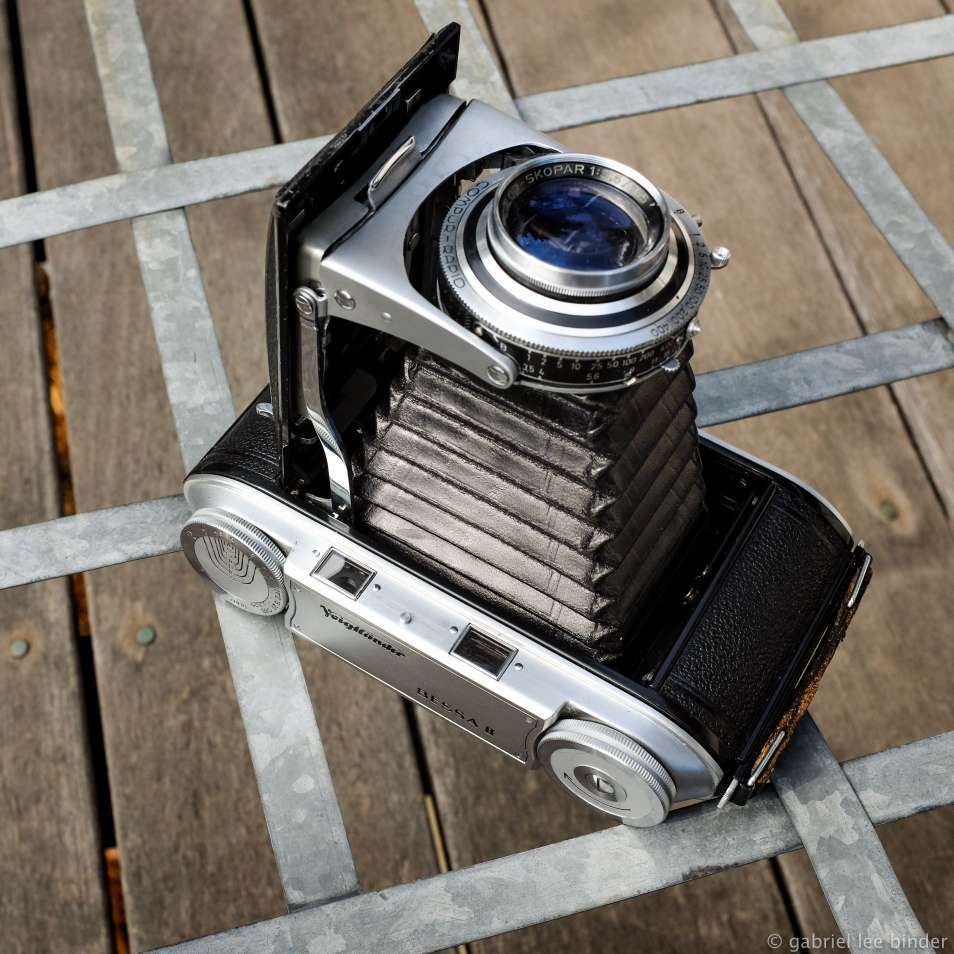