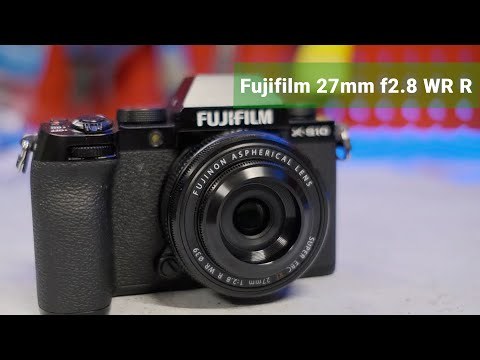 The Fujifilm 27mm f2.8mm has been a favorite for many to use with cameras like the X-E Series Camera. The reason for this preference is because of its small size, weighing in at about 84 grams. The newly designed 27mm only weighs 6 more grams than Fujifilm's previous version.

With the addition of those 6 grams, there are many beneficial new features to this lens. For example, the lens now has a proper aperture ring, allowing the user to easily make changes right on the lens instead of using the dials on the camera.

Another added feature of this new 27mm lens is weather sealing, making it a great lens to carry in any condition. Fujifilm is suggesting that the lens now has extensive weather resistance, and is capable of shooting is temperatures as low as 14 degrees F (or below 10 Celcius).

We gave this new weather sealing a test while we were lucky enough to escape up to the mountain to check out some freshly fallen snow, which is a real difference from the desert warm weather that we are used to seeing. The lens performed just as well in the colder conditions as it did in the heat.

The lens is sharp when wide open at f2.8, and provides great background separation. This proves that this new lens has the same optical formula as the original, which is great.

The newly included Dome style lens hood is a nice touch. This addition helps prevent unwanted light from entering the lens, while also offering great protection of the front element.

The autofocus feels faster than the original version. It has a coreless DC motor that moves the whole lens group. In Fujifilm's words, this offers a fast, precise, and near-silent autofocus.

The original 27mm lens retailed at an affordable $449. Fujifilm has dropped that price to $399 for this new 27mm. For most people, this new low price will be difficult to pass up.

The new 27mm has a much different focal length than many are used to seeing. However, focal length differences can be an advantage. For example, the full-frame equivalent of 41mm is close to some of the older film lenses, like the Leica 40mm that came with the original Leica CL.

If you are interested in purchasing this new Fujifilm XF 27mm f2.8 lens, visit us at camerawest.com